An international love story and some Turkish delights

I found myself back in Istanbul last week. In the middle of what can only be described as a truly international love story. Australian girl, living in Jordan, meets Texan boy, living in Russia, at a party in Lebanon. They spend a weekend together in Istanbul, move to Moscow and marry in the city they fell in love in, less than 11 months later (yes, that really does happen!).

She, is one of the most beautiful people I have been fortunate to know for most of my life, and he – with his enormous love for my friend and delightful Texan charm, is now atop my favourite people list. This is them and this is their song.

It was a few days spent with some very old and dear friends, loving, laughing, singing and (bad) dancing. And for me, attempting to sample some Turkish delights in-between all the fun the frivolity, tick.

More cheese in the form of ‘Borek su Boregi’. Traditionally a baked or fried pastry made from thin flaky dough – that tastes like pasta – and filled with cheese. It’s prepared in a large pan then cut in to portions after being baked to give it a lovely golden crust.

And even more cheese in this unnamed baked good, from the bakery around the corner from our apartment – that we happened to visit every day. A soft herb bread roll, stuffed with cheese.

After a morning spent exploring Topkapi Palace, I couldn’t come to Turkey and go past a kebab with the lot… beef, lamb, chicken and kofta.

Walking through the Grand Bazaar – and feeling a little unsure that the carpet I’d just purchased was A. really a good idea and B. even going to turn up – I spot a man eating his lunch as his food stall. Using my best Turkish (pointing and making eating hand signals), I found myself with a bowl ‘Tavuk Yahni’ and half a loaf of bread. The man apologised that there was nowhere for me to sit and eat. And as I stood, about to tuck in, he pulled together two boxes and lay and paper mat and cutlery down as a make-shift table for me. A simple tomato based stew with chicken, potato and peas.

And for dessert, a doughnut?? Some kind of semolina cake swimming in sugar syrup.

Pomegranate juice. I have such a fascination with pomegranates. I love their slightly ceramic shape and hard shell – the protective vessel carrying a jewellery shop cushion, studded with the rarest of rubies. Opening one is magical, like unearthing gems in a mine. Lucky for me pomegranates are everywhere in Turkey. And although there are vendors on every street corner, freshly squeezing you a cup for just a few dollars, I still feel like this is a precious nectar of the gods. A regal blood-red liquid that’s tart and full of antioxidants

Of all the lovely sweets that come from Turkey, baklava is probably the most well-known. Multiple layers of thin filo pastry sandwiched with crushed nuts – usually walnuts or pistachios – and doused in a sugary syrup. Specialty baklava stores can be found everywhere in Turkey, offering an often overwhelming number of versions made from different ingredients, in all shapes and sizes. But I’m a simple girl and it’s pistachio all the way for me. “Just one?” the man in the shop said with disappointment (you and me both buddy!) “Yes, just one.”

I took a punt with this one. A group of boys had all stopped at this cart to down little chalices of a white frothy liquid. Yoghurt.

Yoghurt is an important part of Turkish cuisine – the English word yoghurt actually comes from the Turkish word yoğurt. Yoghurt accompanies almost all meat dishes and is one of the most common Turkish drinks, ‘Ayran’. It was light and refreshing and not as sour as I had imagined. But the metallic taste of the cup I was drinking from was awful.

‘Tulumba’ is a common Turkish dessert. I’m likening it to the Spanish churros – crunchy on the outside and moist on the inside, again soaked in sugar syrup.

‘Kumpir’, baked potato, is one of the most popular street foods. With hoards of stand-up diners and vendors all lined up in Ortakoy, all calling out to garner your business. I wish I could understand what they were saying… “My potato is bigger than yours”? I don’t know. 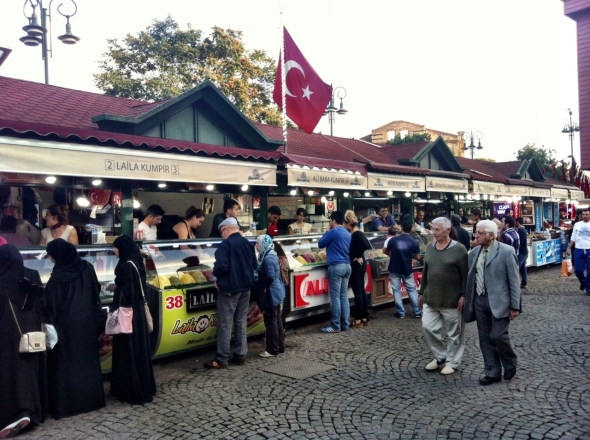 One thing I noticed about all the fruit and vegetables in Turkey were their size and quality – large and bright and full of flavour. Fertile soil, adequate climate and abundant rainfall provide ideal conditions for almost any kinds of crops. And this mini-football sized potato was a perfect example. We stuffed it with tomato cous cous, pickles, olives, yoghurt, cheese and chilli sauce. So warming and satisfying. So simple, and so good.

My last meal in Istanbul, somewhere between breakfast and lunch. A steaming bowl of ‘Kuru Fasulye’ – white bean stew with meat. Topped with dried chilli and mopped up with bread. Totally delicious. 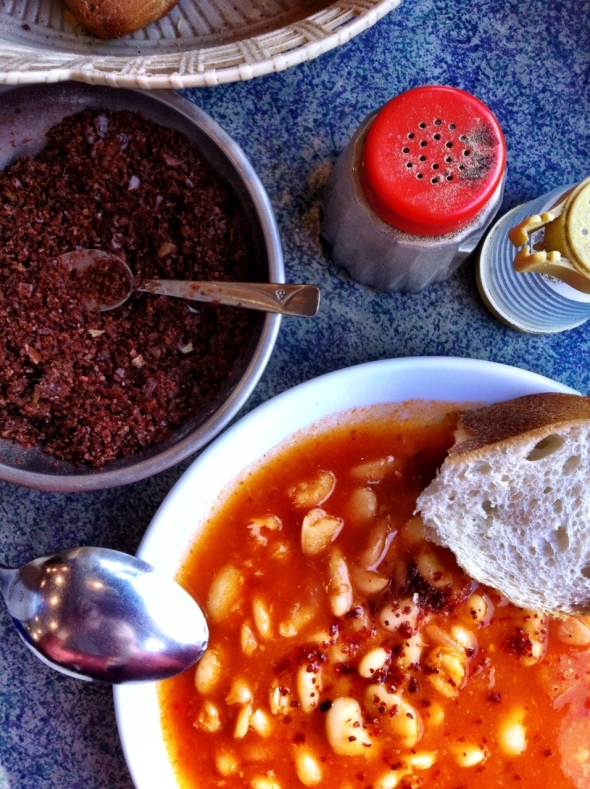 26 Oct This entry was published on October 26, 2012 at 4:27 pm. It’s filed under Lucy's plate, Uncategorized and tagged Turkey. Bookmark the permalink. Follow any comments here with the RSS feed for this post.

One thought on “An international love story and some Turkish delights”