“Come here and let me give you a big smackeroonie” my 6-year-old self can be heard running around the table saying (in slightly pommy accent), in one of my parents home videos. To me, a smackeroonie was a big sloppy kiss, not a wad of cash. Thankfully for some, I’ve become a little more bashful in my old age and spend more time running around tables offering up tokens of my love on a plate instead.

Smackeroonies (or smackeroos) and macarons, really have nothing in common, other than I think they’d both be well received by your love this Valentines Day. Although I’m not a supporter of all the Valentines hoo-ha – every day should be the day you tell someone you love, just how much – I am a sucker for anything pink, heart shaped and romantic in general. So with this in mind, I’m making raspberry and cream filled macarons. 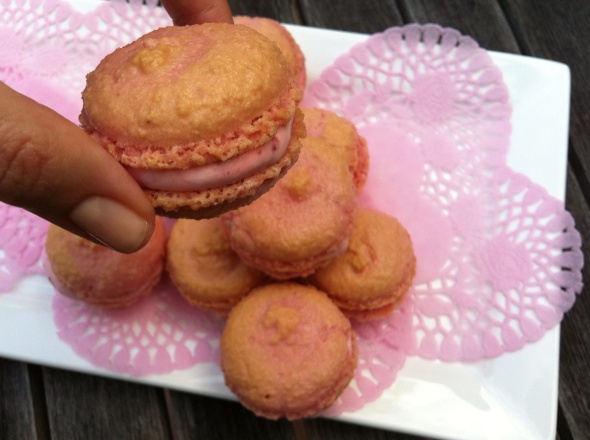 I’ve never made macarons before, but when a beautiful woman tells you “they’re actually really easy” to make (Lorraine Pascale, I’m looking at you), I thought it was about time I tackled the fear that Zumbo Masterchef macaron “tower of terror” had inflicted. I don’t know if I’ve talked about my new lady-foodie-crush Lorraine before? Try watching her series Baking Made Easy and see how much attention you can pay to what she’s actually cooking. It doesn’t hurt that she’s an ex-model but I love her simple approach to cooking and she looks like she really does eat all the delicious things she bakes – whilst staying in ridiculously good shape! Not fair.

According to Paris’s renowned Ladurée patisserie, a true macaron should have a base of almonds – never coconut – and be sandwiched with just the right amount of filling. It should have a glossy, domed top, and a thin crisp shell which yields to a soft interior when you bite into it.

Mine weren’t bad for a first attempt. They hit all the right notes; a biscuit that’s crunchy on the outside and a little bit gooey-chewy in the middle. But they were a little lumpy and rough around the edges (rustic?) – I think due to my almond meal being stored in the fridge and sugar that hadn’t completely dissolved. Note for next time: mix the egg whites and sugar over a double broiler (or a pot of simmering water with a bowl resting on top), allowing the heat to help dissolve the sugar, without cooking the egg whites.

Of course they’re not a patch on the perfect glossy rounds you’ll find at Zumbo or Ladurée – plus their packaging is a little bit fancier than my recycled egg carton. But you just know they were made with love. Not picture perfect, but they still tasted great… and a great excuse to get out my pink heart shaped doilies!

14 Feb This entry was published on February 14, 2013 at 1:05 pm. It’s filed under Lucy's plate, Recipes, Uncategorized and tagged Macarons, Valentines Day. Bookmark the permalink. Follow any comments here with the RSS feed for this post.

One thought on “Smackeroos & Macarons”